Why today women are the center of attention

You are here: Home1 / Why today women are the center of attention

“To talk about gender violence in relation to the widespread violence against women and children would mean putting light on the “sexed” dimension of this phenomenon in so much as […] the manifestation of a historically unequal relationship between men and women that has led men to bully and discriminate against women. ”
(United Nations Declaration on the Elimination of Violence against Women).

Putting women at the centre of the discussion, now, more than ever, is not a habit nor a boast nor a kindness: it is a necessity, a social emergency. It is in fact the actuality of the news that leads us to focus on the most abused genre in the history of mankind. It’s not my duty and maybe not even within my ability, to reconstruct which and in how many cultures and historical periods women have been subjected to violence, both physical and psychological, but for sure it’s today that the most important match is being played: to ensure that both the institutions and politics take charge of stopping what is in effect a massacre.
In fact, even though it is only in recent years that the issue has become a public debate and policies to combat this along with awareness projects and training are missing, the latest research shows that violence against women is widespread, both in industrialized countries and developing countries, and that the victims and their aggressors come from all cultures and social and economic classes. According to the World Health Organization, at least one in five women has been physically or sexually abused by a man in the course of her life (family members are the greatest risk). In our country (Italy), one hundred and thirteen women were killed in 2012 alone (73 by her own partner), that’s about one every three days. The Istat (national institute of statistics) survey of 2006 reports that 31.9% of women have experienced violence and 93% of women who claim to have been abused by their spouse said they did not present an official complaint.

On November the 25th, the International Day Against Violence Against Women established by the UN in ’99, various initiatives were presented including some more “political”, such as the Convention “No more” (which had the approval of the President, Napolitano), the first in Italy where a cross section of women’s associations (from the UDI to the Giulia-association of journalists and from the Usciamo dal Silenzio(out of the silence) to Arci to the International House of Women) and individual citizens  not only denounced the withdrawal of Italy in the fight against gender violence and the maladjustment to international standards (for which our country has also been rebuked by the UN), but to require concrete forms of prevention and a fight against femicide, against the proposed Bongiorno-Carfagna bill which instead relies on too heavy sentencing.
Meanwhile, the site zeroviolenzadonne.it, who has been publishing for years a free press issue is becoming a real archive of murdered women, while civil society, with the support of public figures such as Serena Dandini, Anna Bonaiuto, Paola Cortellesi, Iaia Forte, Malika Ayane, Susanna Camusso, Lilli Gruber, Conchita De Gregorio, etc, are committed to creating awareness. Also D. i. Re., network against violence, has just delivered to the minister Fornero, who is also responsible for Equal Opportunities, an appeal with 20 thousand signatures on it, calling for ratification of the Council of Europe on femicide and implementation of a national plan for the prevention of these crimes. In the meantime, the campaign “One bilion rising” by Eve Ensler, author of the famous Vagina Monologues, has arrived in Italy, which involves 169 countries of the world and plans to make a February 14, 2013 in pink: on that date, in fact women from all over the world will take to the streets to dance (in the United States there will be Yoko Ono, Jane Fonda, Robert Redford and Anne Hathaway).

The issue of this journal, therefore, is a valuable contribution to keep the focus on that part of the human race that, apart from being understood, listened to and learned from, must be defended, protected and respected.

Translated from Italian by Laura Rodriguez 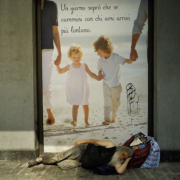 Border areas: the experience of a group of women migrants. From invisibility to the birth of a dream space

Women victims of violence: Taking charge and impact of the work on the professional helpers

The Love that moves the Sun and the other Stars (1) Short Presentation of the edition: “Although we are women” (2)

From counsciousness raising to women’s groups of the 21st century

The oneiric world of women in the Grete Stern’ s photomontages