You are here: Home1 / Presentation, Time and Narration 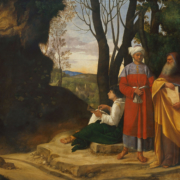 Time and Narration opens with an introductory essay by Antonino Ferro that reveals the complex semiotic substance of the theme, the range of research it has inspired and the significance of narration in the psychoanalytic framework.

Ferro’s own highly articulated study on the narrative and transformational essence of the here-and-now of the analytic session has contributed to opening up new dimensions for psychoanalytic and transference theories, which take on particular importance in light of the changes being ushered in by modern pathologies and the contexts in which they originate. The book’s various articles examine, above all, the social benefits of narration and its relationship with the (a)temporal element.

The relationship between memory and forgetting is explored through one patient’s recollection and two fairytales that figure in his analysis, in the course of which several memories can and should be transformed and left behind in favour of a restored present. Indeed Blue Beard and Sheherazade suggest two polarities: Blue Beard’s room full of chopped, mutilated pieces to which the patient returns co-actively again and again; Sheherazade’s unravelling of the traumatic recollection of betrayal, which takes place through the inventive activity of narration. The author also points out how literary associations can, in some cases, take the place of more direct and personal expressions during a session, compensating for the lack of necessary elements by which to elaborate frightening feelings and allowing the analysis to proceed. This assumption leads to the identification of a different use of memory and underlining the importance of being able, while recalling, to oscillate between content that is difficult to face, and is therefore avoided, and crystallised fragments that, despite their apparent minor significance, have an important cohesive and containing function. The session and the fairytales, which are represented here in different ways, treat the elements of terror and memory fragmentation (Neri).

In an invaluable thematic section that follows Pierre Lafforgue and several Italian authors propose the narration of fairytales as a symbolic mediator with groups of children.

Explored are various aspects that suggest narration as a form of group elaboration: for example, the group that gathers, elaborates and transforms infant observations carried out according to Esther Bick’s “baby watching” method. This latter seeks to associate various observation summaries in order to foster the possibility of recreating psychic bonds and timeframes missing in those infantile situations in which early primitive suffering taking place outside the temporal or psychic framework can neither be symbolised nor communicated and signalled (Mellier).

Narration is also chosen, in the context of relations among a group of adolescents, as a sensor that regulates the possibility of making sense of ignored–ignoring feelings and channelling them toward communication within the peer group and toward the adult world. Here narration is identified as a function that modulates developmental fluctuations (Bernabei).

With regard to a collective mental state characterised by polysemantic elements, the link between narration and time is viewed as an exclusive event capable of creating meaning and achieving change as long as it avoids erasing the time of the experience by anticipating future time or defensively expelling time already past, maintaining instead the possibility of testing or learning from the experience (Marinelli).

The recounting of dreams, a special type of narration that crosses over the various timeframes of the dream image, is described as having a linking function that enhances the ability to relate and produces new fields of meaning and contact, with powerful inter-subjective developmental benefits (Friedman).

A painstaking and highly valuable consideration of narration’s epistemological function avails itself of multiple sources and theoretical approaches, describing narration as an organiser of the emotional and cognitive experience within the analytical micro-group (Stagnitta).

The telling of fairytales to groups of children in three atelier activities (storytelling, role play, and drawing—or word association for the older children) is used as a symbolic mediator, and a detailed, in-depth examination is made of the narration’s structure and the (therapeutic) function it performs as it establishes a stabilising rhythm, repeating what is already known and defining juxtapositions and the other immediate and certain “figurative” elements of the archaic popular tale. This, in association with the universal figures of the collective unconscious, offers a useful repression model for neurotic patients and a re-organising experience for autistic and psychotic patients as it facilitates contact with extreme psychic elements, which are, however, rendered less frightening as a result of their having already been defined and repeated (Lafforgue).

With regard to working with children in the atelier setting the author gives an insightful introduction to the specific structural and semantic qualities of fairytales and their resemblance to dreams. Below are a few particularly salient excerpts:

In oral narration, unconsciously transformed by tradition on a continual basis, the added absence of an author gives the group the exclusive possibility of imagining or elaborating the content presented. Moreover:

“A fairy tale ignores psychological motivations; the heroes’ adventures develop without anything being said as to the personal reasons which led them to act. Thanks to this lack of motivations, a fairy tale offers a wide rage of potential meanings for the listeners”.

The effective introduction to the theoretical theme allows another author to report an experience with two groups of children in which the elements of the setting, described as living and containing elements, highlight how the device of the group and the progress it makes foster affective resonance among its members, thereby succeeding in producing a transformation of the narrated and drawn elements (Puzzo).

The third article in the section describes a highly evocative experience within the same framework of the fairytale atelier (associated in Italy with a theoretical and practical approach based on Pierre Lafforgue) and supported by an abundance of research and applications ranging from the fairytale to psychoanalysis with children locked inside an autistic “skin”:

“The possibility, though intermittent, to perceive the group as a container of thoughts allows each person to start and express their own psychic problems: this is the process which E. Bick (1968) defines as the creation of an individual psychic skin stimulated by the group membrane or the common psychic skin. D. Anzieu (1985)…… On re-reading the reports of the sessions in the attempt to outline its history, one often gets the same feeling of meaninglessness and chaos which we had already experienced when working with these children, especially at the very beginning. We will see in the clinical material how the mediating object, i.e. the fairy-tale, allowed us to find a language of symbolic images through which therapists were able to make sense of the shapeless feelings present in the group, sometimes expressed only at a bodily level, and to highlight  reference points or meaningful metaphors capable of activating some responses”.

In particular, narrating it and suggesting appropriate models, the writer and her collaborators recreate the experience of a group able to experience a sense of body for the first time:

“as a harmonious aggregate of different sensations: the sound envelopes represented by the modulations of the narrator’s voice, the visual one created by the exchange of looks, the tactile and olfactory ones provided by the welcoming environment of the atelier.”

The meaning underlying the tenderness and violence of autistic affection is discussed and with it the tenacious struggle of the fairytale atelier to dislodge it from a defensive envelope and to replace that envelope with a living one (Messeca and collaborators).

The tale has had its moment — let the narration begin!