You are here: Home1 / candomblé 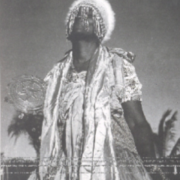 Axé: sacred energy, vital strength that can be found in man, animals and vegetables.

Barracão: the room in which the public rituals take place.

Bùzio: shells that are used for divination.

Caboclo: divinity that represents an indigenous spirit, in Candomblé de caboclo and in the Angolan Umbanda.

Ebo: offering, or sacrificed animal offered to the divinities.

Saint Son/Daughter: all those that have accomplished the initiation ritual.

Ialorixà: the leader of the Candomblé community, with most inner Axé. In Brazil this role is more commonly called mãe de santo.

Olorun: the supreme divinity of creation.

Roça: it’s the same as terreiro. An open space surrounded by trees.

Roda: the circle that is formed by the priestesses in dance.

Sapucaì: this is the name of the famous sambodrome “Merquès de Sapucaì”, that was built in Rio de Janeiro in 1984. The architect that planned the sambodrome is Oscar Niemeyer, this structure can hold a END_OF_DOCUMENT_TOKEN_TO_BE_REPLACED